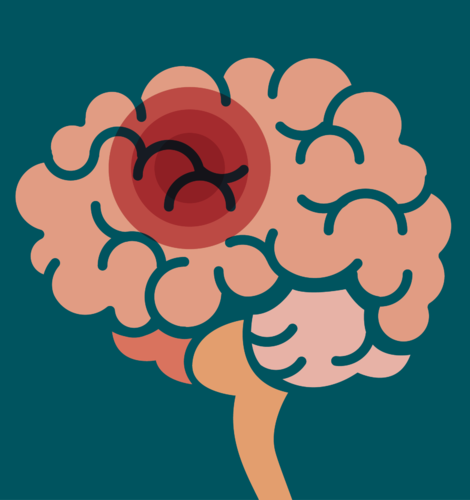 A recent study on cerebral strokes induced experimentally in mice investigated interactions between the gut and the brain, and the role of the intestinal microbiota in the process.

Findings shed some new insights and may have important implications for strokes in human.

The pathological effects of a stroke include inflammation of the brain resulting from the activity of certain cells of the immune system.

In this study, mice were treated with antibiotics for 2 weeks to significantly change the composition of the intestinal microbiota by killing or inhibiting the growth of bacteria sensitive to the antibiotics used.

When a stroke was induced, the volume of impaired brain tissue was significantly reduced when compared to non-antibiotic-treated mice. This suggests that certain antibiotic-sensitive bacteria can exacerbate the damage caused by a stroke.

Two kinds of immune cells, called T-cells, are involved in the inflammation process: T-effectors and T-regulators. Both of these cell types are formed in the small intestine.

In non-treated mice, T-effector cells migrated from the intestine to the meninges (tissue covering the brain), where they released toxic factors that aggravated the injury caused by the stroke.

In antibiotic treated mice, the altered composition of the microbiota leads to an increase of T-regulator cells, which suppress the migration of T-effector cells to the meninges.

These results demonstrated that the intestinal microbiota influence in the outcome of a stroke by regulating the relative amounts of the two types of immune T-cells involved in inflammation.

Does a stroke itself alter the composition of the gut microbiota? And if so, does the resulting change affect the outcome of the stroke?

The researchers induced a severe stroke in the non-treated mice. Analysis of their gut microbiota composition found that there was a significant reduction in the total diversity of bacterial species, and also an increase in the growth of certain specific bacterial species.

What is the connection between an injury to the brain and a change in the gut microbiota?

The study found that the severe stroke, through effects on the nervous system, results in a reduced motility of the gastrointestinal tract. This is may have altered the microbiota composition.

Is microbiota composition alteration linked to the outcome of a stroke?

When a stroke was then induced in these mice, it was shown that the volume of injured brain tissue in them was significantly greater than in mice that were fed microbiota from healthy mice.

In addition, tests showed that the mice fed stroke microbiota were more impaired in behavior than those fed with microbiota from healthy mice.

These results indicate that gut microbiota of stroke mice have a causal effect on the outcome of a stroke.

Is it possible to ameliorate the outcome of an induced stroke using gut microbiota of normal healthy mice?

Microbiota isolated from feces of normal mice were fed daily to germ free mice starting on the day on which stroke was induced. There was a significant reduction in the volume of brain damage as compared with control animals. It was also found that these animals had an increase in the number of T-regulator cells.

These data indicate that establishing a normal microbiome in the gut can improve stroke outcome.

These experiments reveal a brain-gut interaction in which the initial brain injury caused by a stroke affects the motility of the gastrointestinal tract. This results in significant changes in the gut microbiota.

The changes in turn modified the production of immune cells in the intestine, some of which migrate to the meninges where they instigate an inflammatory reaction, adding to brain injury.

It remains to be seen if particular distinct species of gut bacteria or certain groups of them play a role in these events.

Implications for stroke in humans

These experiments with mice are important for the understanding and potential treatment of stroke in humans.

There are reports of changes in intestinal microbiota in stroke patients. Such patients also exhibit reduced intestinal motility although there is no direct evidence that this is linked to changes in gut microbiota.

As for treatment of stroke, the findings with mice suggest that inflammation induced brain injury may be reduced by restoring the gut microbiota to its normal composition.