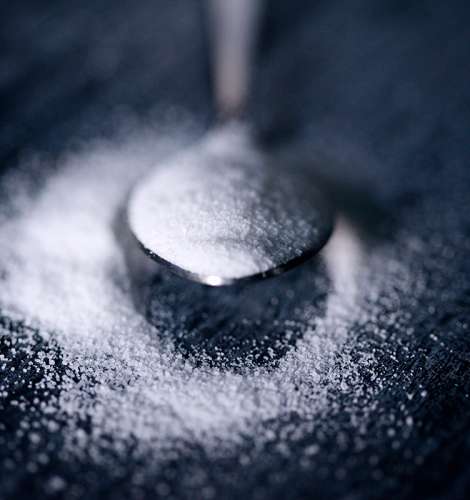 Studies show that high sugar intake, and diets high in glycemic index and glycemic load are associated with a higher risk of osteoporosis and bone fractures.

What are glycemic index and glycemic load

The glycemic index is a system of assigning a number, from 0 to 100, to carbohydrate-containing foods according to how quickly and how much a food increases blood sugar, with pure glucose assigned a score 100, which represents the rise in blood glucose 2 hours after consuming it.

The lower a food's glycemic index, the slower blood sugar rises after eating that food. In general, the more processed a food is, the higher its GI, and the more fiber or fat in a food, the lower its GI.

The glycemic load (GL) of a food estimates the effects on blood glucose from consuming carbohydrate foods based on GL units, with 1 GL unit representing the effects of eating 1 gram of glucose.

GI does not indicate how high blood sugar can rise after eating a certain food, whereas the GL unit of a food shows both the food’s impact on blood glucose level as well as how much glucose per serving of food it delivers.

Watermelon, for example, has a high glycemic index of 72. But a serving of watermelon has so little carbohydrate that its glycemic load is below 5 (See figure and note).

Glucose plays a role in osteoporosis?

Osteoporosis is a disease characterized by compromised bone strength and increased risk of fracture. With age, bone mineral density decreases, and the risk of osteoporotic fractures increases.

High glucose and insulin concentrations seem to have a negative impact on bone health.

On the other hand, some clinical trials have reported a significant increase of blood glucose and insulin concentrations after the intake of high GI and high GL diets.

However, the relation between bone health and dietary GI and GL had not been previously explored.

A recent study examined the association of dietary GI and GL with the risk of osteoporotic fractures in a group of 870 participants aged 55–80 years old who were at high cardiovascular risk.

Their dietary GI and GL were estimated from validated food questionnaires with the use of international glycemic index and glycemic load values based on glucose as reference.

The total GL of each meal was determined by multiplying the total carbohydrates of a specified serving size of the food, the total number of food portions consumed per day, and its specific GI. GI was calculated by dividing glycemic load by total available carbohydrate intake and multiplying the result by 100.

A total of 114 new cases of osteoporotic-related fractures were documented after a mean follow-up of 8.9 years.

Nature is another name for health

Speaking of risk…what do the numbers mean?