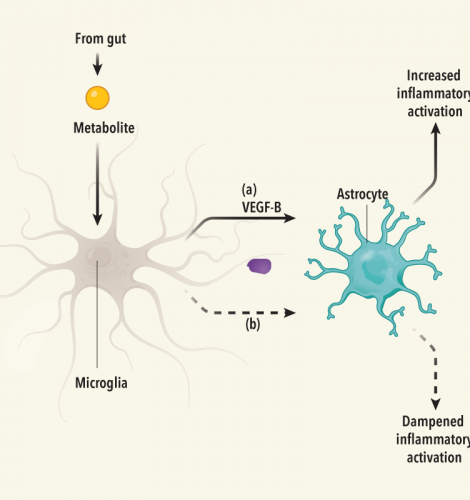 A role for the gut in multiple sclerosis, MS

In the mouse model of multiple sclerosis (MS), researchers found that gut microbial product can signal and change the activity of immune cells in the brain to remotely control brain inflammation.

They suggest that the gut plays an important role in the progression of MS.

Previous studies a decade ago by the current team of researchers with another group showed that the control switch for the brain’s immune microenvironment involves two non-neuron (glia) brain cell types – the microglia (immune cells of the brain), and the astrocytes (multifunctional cells).

A specific receptor, AHR (aryl hydrocarbon receptor), on the surface of these cells plays an immuno-regualtory role, either dampening or increasing inflammatory activations.

As such, it modulates the progression of the mouse model of MS – an autoimmune disease in mice in which the overactive immune system attacks the central nervous system.

When activated, microglia cells seldom act alone. They usually instruct astrocytes to take action, such as to attack neurons.

In the current study, the researchers showed how these two glia cell types communicate on a molecular level to influence inflammation in the central nervous system and the brain. They concluded that the activity of microglia and astrocytes is modulated by AHR during brain inflammation in autoimmune disease.

But what signals influence AHR in the microglia cells?

The researchers further showed that the microglia AHR are, in turn, remotely controlled by tryptophan, a metabolite produced by microbes in the gut. (See graphic summary of the steps involved).

Using groups of mice with MS, either with AHR or with AHR genetically removed, they showed how AHR in microglia cells directly instructs inflammatory response of the astrocytes - by regulating the expression of genes encoding two proteins, one increases and the other dampens inflammation.

They then confirmed that the related inflammatory response was limited to the central nervous system, and immune response outside of this system was unchanged.

Next the researchers investigated what signals might influence microglia AHR.

AHR is bound by a broad range of molecules including dietary derivatives such as tryptophan, a metabolite produced by gut microbes after processing certain foods.

The researchers therefore fed MS mice with diets either enriched or depleted in tryptophan. They found that tryptophan depletion worsened the MS in mice, while enrichment reduced symptoms.

By contrast, neither diet had any effect on the MS mice if their AHR had been removed. Additional studies on human MS brain tissue suggest that a similar mechanism is at play in the human brain.

Healthy and efficient inflammatory response is essential for proper function of the central nervous system including the brain.

This work broadens our understanding of the interactions between gut microbes, immunity, and the brain. The findings are, therefore, likely to have implications beyond MS.

Therapies that target components in the molecular pathway mapped out in this study could one day prove useful in MS and other neurological disease treatments.

The study also suggests that inflammation in the brain may be dampened indirectly via the gut, and perhaps through diet. This research is reported in the journal Neuroscience.

1) microbes in the gut process foods

2) they produce metabolites (e.g. tryptophan in this study)

4) metabolite binds to a specific receptor, AHR, on the surface of the microglia cell

5) microglia AHR controls expression of the genes encoding 2 proteins, one (a) to increase, and the other (b) to dampen inflammation

6) via (a) or (b), microglia AHR instructs astrocyte, another type of glia brain cell, to activate immune response, either to increase or to dampen inflammation

Broccoli, cauliflower, and other members of the cabbage family contain components that bind AHR either directly or after being processed by gut microbes into tryptophan.

Other foods that may raise the levels of tryptophan include kiwi, plums, bananas, potatoes, eggplant, tomatoes, walnuts, eggs, turkey, milk, cheese, meat, fish and other seafood. Combining a carbohydrate source with protein intake has been shown to raise the level of tryptophan.

For balance and to prevent too high a level of tryptophan, increase intake of fibre and foods high in other amino acids such as soy, legumes, and nuts and seeds. 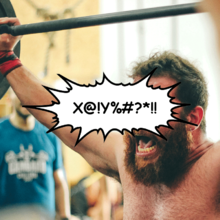 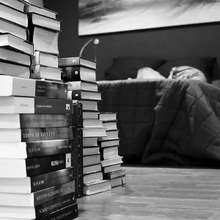