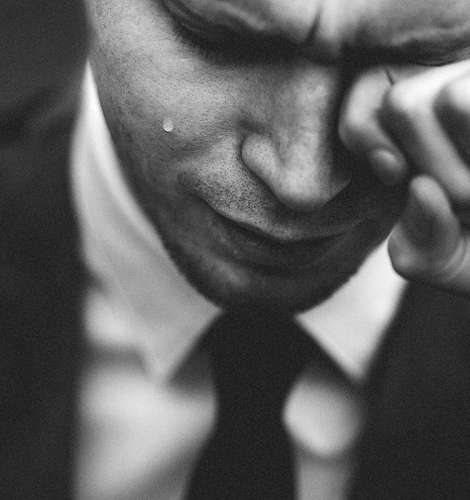 Crying and weeping are two important ways for humans to express their emotions. A lot of animals cry, but only humans can weep. Although many people perceive weeping as a manifestation of weakness, a review study concluded that weeping is an important behavior, distinct from crying.

It suggests that weeping offers advantages such as stabilizing the mood, communicating sorrow, and soliciting help, and humans have elaborated and selected to weep throughout their adaptive history. Findings of this review are reported in the scientific journal New Ideas in Psychology.

Weeping is not crying

Crying is both a symptom of pain or anger, and a signal to warn others of danger. It is characterized by the expression of feelings with emphasis and aggressiveness. Crying involves a change of face color and expression, muscular tone, and an increase in tone of voice and tremors. Physiological reactions include increased heart rate, blood pressure and muscular tone. Crying also often leads to the production of specific hormones, such as adrenalin.

On the other hand, weeping is a behavior that involves lachrymal psychoemotional hypersecretion in specific states of emotions. It has been shown scientifically only in humans. One distinct difference between crying and weeping lies in the psycho-emotional shedding of tears.

Factors such as age, gender and biological conditions have an impact on weeping. For instance, newborns cry but do not weep until about 2-3 months of age. Infants and young children weep more frequently, while grown-ups have normally learnt to control weeping behavior.

Women weep four times longer in duration than men, and do it more frequently a few days before the onset of pre-menstruation and menstruation, and around ovulation. Not only do people weep when they are in sorrow, but they also weep when they are happy or touched. Weeping can happen when people are in a social situation or alone

Several previous studies have shown that mirror-neuron network, which may help learn new skills by imitation, plays an important role as a mediator between weeping and the resultant empathy gained. People who are more empathetic have their mirror- systems of emotion more strongly activated.

Weeping brings advantages. In situations when help is needed, a tearful weeping makes it easier to solicit help, owing to the impression of helplessness and friendliness, and the feeling of connectedness the weeping person projects.

It is also believed that weeping has self-soothing effect and reduces stress. This may be attributed to tears running down and massaging the cheeks, which produces endorphin.

Endorphins are endogenous opioid peptides produced by the central nervous system and pituitary gland as a response to stress, massaging the skin or ingestion of sweet solution. They give a sense of release, soothing comfort, and analgesia. This may explain why people feel better after weeping!

Weeping helps to stabilize mood. It has been shown in weeping studies that the mood of participants improved rapidly, and was less negative about the emotional event after weeping. Besides negative emotional events, the mood stabilizing mechanism of weeping is also common in positive emotional states such as watching a romantic movie, at the birth of a baby and winning a competition.

The researcher suggests further studies to explore the potential of weeping in reducing stress in everyday life, and in its use as a therapeutic tool to monitor and interpret psychological needs, and to improve psycho-emotional symptoms.

​George So holds a Master’s degree in Child and Family Education from the Education University of Hong Kong, and a BA in Psychology and Economics from Wilfred Laurier University of Canada. Read more…