Mental benefits of exercise can be passed on to offspring? 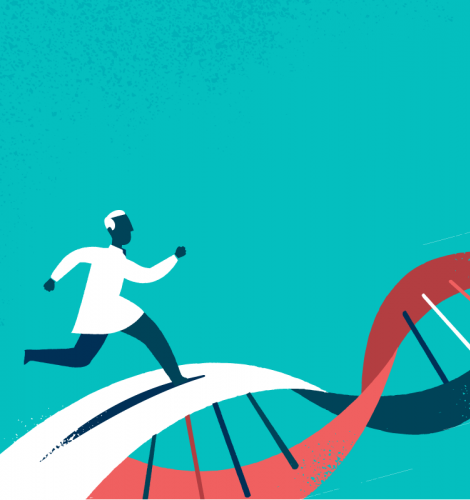 Researchers showed that mental benefits from a combined program of physical and mental exercise can be passed on to the next generation – at least in mice.

DNA inheritance was not involved in the transmission of these inherited mental benefits since there was no change in DNA sequence. Rather, altered expression of RNA in the father’s sperms following the physical and mental exercise was responsible for the benefits, the researchers reported.

A belief prevalent in the field of genetics for a very long time was that acquired skills cannot modify genetic DNA sequence, so they cannot be passed on to the offspring.

However, in recent years, there is emerging evidence that exposure to environmental stimuli can initiate processes that transmit information to the next generation without involving changes to the genetic DNA sequence. This form of inheritance is called epigenetic inheritance.

Life and environmental factors such as poor diet, stress, and trauma can lead to epigenetic changes. Epigenetic, transgenerational inheritance have been described for environmental stimuli such as chronic or early life stress, which can lead to altered stress hormonal response in an individual and increased anxiety and depressive behavior in the next generation.

There is also evidence that exposure of an individual to adverse environmental stimuli can lead to altered cellular adaptations that protect the offspring when they are exposed to the same environmental insult.

Combining physical exercise and cognitive training, a paradigm called environment enrichment (EE), has shown to increase cognitive abilities in mice and humans, enhancing learning and memory, and lower the risk of various complex diseases including those affecting the brain, such as Alzheimer’s disease.

EE is also known to enhance synaptic plasticity in rodents and humans. Synaptic plasticity is a measure of how well nerve cells communicate with each other, which forms the cellular basis for learning and other cognitive abilities.

Results showed that, compared to the control groups of mice, both the EE group mice and their offspring showed improved synaptic plasticity in the hippocampus, and achieved better results in the learning ability evaluation tests.

Since sperm contains paternal DNA and RNA molecules, the researchers extracted RNA from the sperm of the EE group of mice, and injected the RNA into fertilized mice egg cells. The resulting offspring were found to also have enhanced synaptic plasticity and enhanced learning ability.

The researchers then traced and were able to identify some of the RNA molecules responsible for the epigenetic inheritance of the mental benefits - including RNA microRNA212 and microRNA132.

These RNA molecules had accumulated in both the brain and germ cells of the mice following the physical exercise and mental training. Germ cells are cells that give rise to the reproductive cells of sexually reproducing organisms, known as gametes.

The researchers concluded that the combination of physical exercise and mental training enhances the cognitive abilities of both the adult male mice and their offspring. The transgenerational benefits were passed on through epigenetic inheritance facilitated by altered RNA in the sperm.

The challenge for the researchers now is to find out whether RNA molecules also accumulate in human sperm after EE, the paradigm that combines physical and mental exercise.

The researchers in this study are from the German Center of Neurodegenerative Diseases in Gottingen and Munich, and the University Medical Center Gottingen. Their findings were reported in the journal Cell Reports.

Co-authored by:
Lillian So Chan, Editor