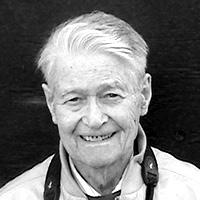 Gerald W. Paul was ordained by The United Church of Canada in 1957 and served in Ontario parishes as minister in Manitouwadge, North Bay and Kincardine. He was the first interdenominational chaplain at Carleton University (1964-70), director and creator of programs bridging campus, faith communities and global concerns at Iona College, and chaplain to the University of Windsor (1970-77).

With his family, he explored the simplicity lifestyle: exchanged car for bicycles, ate nutritionally, reduced consumption, walked daily, contributed to developing nations, and lived by the motto, “live simply that others may simply live. Together, with his wife Shirley, they spoke to many groups and institutions on the subject, ran seminars and were covered by newspapers and other media including national magazines.

In 1983, he and Shirley made a grand change. Gerald left parish and university work in order to write full time. Shirley became executive secretary to the Kingston General Hospital Board. Gerald won first place in the essay division of Writer’s Digest Competition in 1984.

His essays and columns have been published in over 25 magazines and newspapers including: Chatelaine, Readers Digest, Christian Century, Clergy Journal, Canadian Author, Windsor Star, Hamilton Spectator and over 950 columns in The Kingston Whig Standard.

The categories of his publications are: philosophy, ethics, biography, perennials, nature, and health. An as yet unpublished self-help book, Gazing at the Greeen, shows how viewing nature from different angles of vision prevents lifestyle illnesses, restores and enhances well-being and enables ordinary people to move toward wholeness.